It is midnight on June 8, 1926. Rosalee Hartmann (Vanessa) puts a gun in her garter and walks out of her house. There, she meets Mr. Scruthers (Stephen) as both step into a chauffered car.


Baxter Leighton (Micah) wakes up after a restless night of sleep. He is in a loft apartment above a gallery displaying his works, decorated with normal furnishings. He opens his bedside drawer , gets his dream journal ,and flips through it absentmindedly in search of something to paint. He finds something, a description of a being holding a cross between a pistol and a VHS tape, and takes five minutes to make a rudimentary sketch. He opens a window to let in a breeze, and sees a car pass by.

Rosalee and Mr. Scruthers pull up to the art gallery. They get out and try to enter, but are refused entry.

"We have a personal matter with a certain Baxter Leighton", says Mr. Scruthers.

"I'm sorry, but you'll have to wait until morning", says the guard.

"Alright, we have alegalmatter with him"

"Um...do you have any papers or something?"

Mr. Scruthers gestures for Rosalee to get the relevant documents out of the car. She does it, but as she walks back she hears something very faint in the background. She listens more closely,\and she thinks she hears something resembling a religious rite

She listens even more intently.

"Rosalee!" Mr. Scruthers exclaims. "What are you doing?"

Rosalee and Mr. Scruthers enter the gallery, walk up the stairs, and knock on Baxter's door. Baxter opens up and grudgingly asks what the problem is. Mr. Scruthers suddenly accuses him of being a thief, to which Baxter demands an explanation.

"Can we come in?" asks Rosalee, interrupting.

Baxter invites them in and gestures them to sit on the floor. Mr. Scruthers sits on the bed in protest.

Mr. Scruthers proceeds to explain to Baxter that his latest painting (entitled Goat Thing)was stolen from his dream journal, and that he demands royalties.

"You don't look like much of an artist", says Baxter.

Frustrated, Mr. Scruthers rustles up a small book, opens it up, and shows him a rough chicken-scratch of a drawing that only looks vaguely like a goat.. Baxter then insists that they go down to the gallery to actually look at the concerned painting.

They go downstairs, where Baxter pulls Rosalee aside.

“Does this Scruthers person have much of a case?” he asks

“How much is he paying? Maybe I could top his offer, and actually get some sleep.”

“That’s classified” she says. “Besides, this visit is going a little long for my taste.”

Suddenly, a guard walks up to Baxter.

“There’s a man we caught trespassing. He says that he needs to see you”.

Baxter rolls his eyes, and says “Let him in”

He does so, and Baxter suddenly gestures everyone, including Alexander (the trespasser, played by Christian) to go upstairs.

Flashback to Alexander’s past. At night a few weeks before, he is tilling the garden of the monastery where he resides. Suddenly, he notices movement in the trees surrounding the monk’s complex, and he goes to investigate. To his horror, when he arrives he sees that one of the trees is oozing green slime. He runs back to the monastery to wake his friend, Brother Joshua Brollo. In a few words, he expertly convinces him to come with, and they travel to the scene of the incident. However, the tree is no longer there. He then hears a noise behind them and turns around. The tree, now revealed in its fullness as a giant grotesque goat, is there, and charges forward to the tree-line, ensnaring Brollo in its tentacles. In shock , Alexander goes to wake the Father Superior. He doubts his story, and they go to Brollo’s quarters to confirm it. Surprisingly, Brollo is sleeping, safe and sound. Alexander is dumbfounded, causing the Father Superior to exclaim:

“Alexander, you’ve been here for a very long time. Perhaps it’s time you go and see the world.”

Alexander spends the next few days exploring the secular side of Boston. About a week in, he decides to visit an art gallery, just for the heck of it. However, one of the paintings in this gallery depicts the very being he had seen carry off his friend. It looked like this: 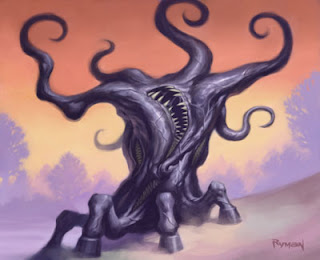 “Who painted this?” Alexander asks the building’s landlord, who was conveniently standing nearby.

“His name is Baxter Leighton.”

"Of course" he says, sincerely.

Flash back to the present.

"Oh no! Not at all! I was just wondering if you could give me some more details on your dream."

Baxter grudgingly gets his dream journal and flips to the relevant entry. He tells a bizarre tale of the being loping through a sandy expanse.

"Well...it is a dream." remarks Baxter

"Do you have a representative or something?" he asks Baxter.

"Well, there's my landlord, but he's been missing for about a week."

"OK...does that mean that as long as we can't find him, we delay the case?"

"No, just that if we don't, you won't be represented."

Mr. Scruthers looks expectantly at Baxter, making the latter realize that he wants to begin as soon as possible. They move to leave, when suddenly Alexander says,

They are about to open the door, but suddenly it bursts open and a guard steps through. He standing straight and staring wide-eyed.

"Can we help you?" asks Alexander.

Suddenly, the guard falls down, revealing a knife stuck in his back. It is a bloody mess, causing Alexander to go into a brief shock, but leaving the rest unaffected. Out of the corner of his eye, Baxter notices a shadow going down the stairwell. He yells that there is someone there, causing Mr. Scruthers to draw a gun. He, Baxter, and Alexander move down the stairwell, leaving Rosalee behind. Mr. Scruthers turns a corner, but is knocked down by a hidden assailant, knocking the gun out of his hand. Alexander picks up the gun and impulsively shoots it into the ceiling. It is a loud shot, briefly stunning the attacker, long enough for Mr. Scruthers to draw his knife and attempt to stab him in the arm. He misses. Baxter goes around the corner to grapple him, but he fails. Alexander, throwing the gun in the floored Baxter's face, does the same with the same result. Baxter catches the gun, gets up, and points it at the assailant.

The attacker, revealed to be a hooded figure, surrenders, putting his hand in the air.

He does so, but as he enters the gallery, he notices several hooded figures approaching. He tries to hide, but trips, immediately attracting their attention. He runs back up the stairs, announcing what he saw. All, including the hostage, move up to the loft to escape. Then, with a great wind, Alexander moves the body and shoves a table in front of the door. Rosalee rushes out the window onto a fire escape. Baxter quickly grabs his dream journal, his father's journal, and some art supplies, but before leaving unhoods the assailant. Alexander immediately recognizes him as none other than Brother Brollo.

"What are you doing?" Alexander asks. He is silent.

"Why would you do this?" he asks again, this time eliciting a hiss.

Following Baxter, Alexander rushes out. Just as they reach the bottom, they hear a loud gunshot, after which  Mr. Scruthers, without the captive, descends. They all begin to leave and turn the corner just in time to break line-of-sight.
Posted by Christian Swenson at 8:15 PM No comments:

Email ThisBlogThis!Share to TwitterShare to FacebookShare to Pinterest
Labels: A Brush with Fear

"A Brush with Fear" Character Introductions

Welcome! This blog will be dedicated to recording the many exploits in our Call of Cthulhu campaign, tentatively entitled A Brush with Fear. In this campaign, set in Boston, Massachusetts in the year 1926, we will encounter and investigate many otherworldly beings and try to survive as best that we can. This first post will introduce our characters

Baxter Leighton: Played by Micah Schow, Baxter is a 25-year-old surrealist painter. Though he grew up in England, he moved to France after the Great War to both help rebuild the country and to study art. There, he became a respected student of the surrealist school, rubbing shoulders with the greats. About a year ago, he moved to the United States with the intention of being one of the first to spread his school in the region. He is fairly humble, but also very eccentric, and sarcastic at times. He has been having troubling dreams recently, inspiring many of his recent, most popular, works

Leroy Scruthers: Played by Stephen Stannard, Leroy is a 48-year-old veteran of the Great War, and his since gone into an unscrupulous business of vague intent. He's also portly and self-centered. When this campaign starts, he is beginning a lawsuit against Baxter, claiming that his latest painting, depicting a grotesque monster, was stolen from his dream journal.

Rosalee Hartmann: Played by Vanessa Ledbetter, Rosalee is a 35-year-old single lawyer. In her youth, she worked both with the Red Cross and as a social worker  Though intelligent and attractive, she is also impatient and, at times, quite mean. She has been hired by Mr. Scruthers in his lawsuit against Baxter.

Alexander St. Jacques: Played by me, Christian Swenson, Alexander is a 21-year-old monk, adhering to the Order of St. Dionysius. A native of Boston, the loss of his brother to the Spanish Flu epidemic in 1918 caused him to turn forever from the world and toward God. Alexander is genuinely devoted to his religion, and, although quite naive, is extremely kind and sincere. Just before the campaign begins, Alexander had a troubling experience where he saw the very being depicted in Baxter's painting.
Posted by Christian Swenson at 12:44 AM No comments:

Email ThisBlogThis!Share to TwitterShare to FacebookShare to Pinterest
Labels: A Brush with Fear
Newer Posts Home
Subscribe to: Posts (Atom)